Peary Caribou – Why Are They Endangered? 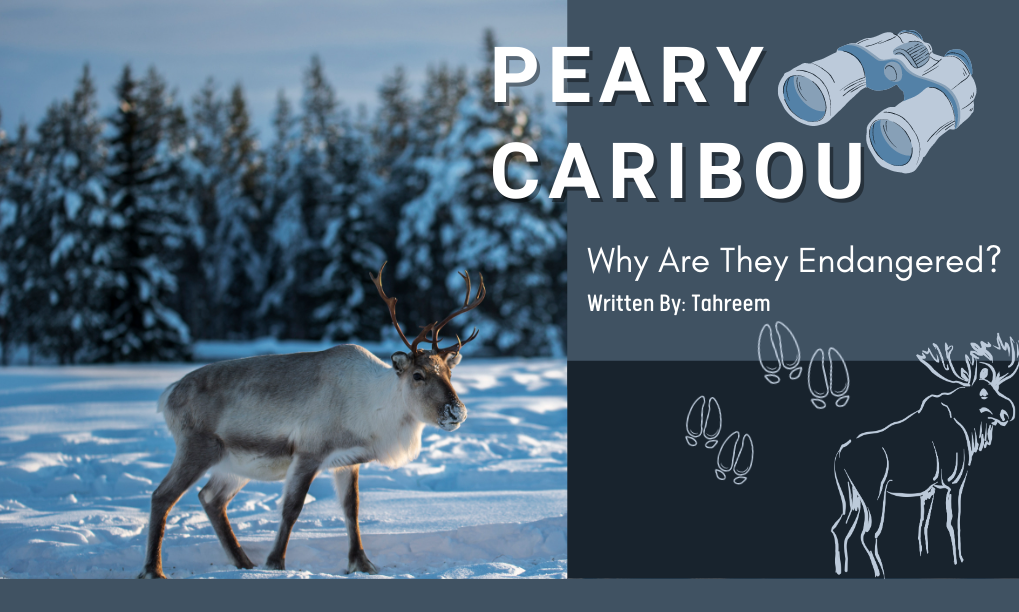 Peary Caribou – Why Are They Endangered?

The Canadian Arctic Archipelago is home to a remarkable array of creatures including the Peary Caribou! Peary Caribou were named after Arctic explorer Robert Peary, who chronicled his encounters of this species during his journeys to the North Pole.

Caribous, also known as reindeer in Eurasia, are classified into separate groups based on ecological and behavioral variations, or ecotypes. Three of the 12 recognized subspecies inhabit Canadian territory, with the Peary Caribou being the smallest. The fact that both males and females have antlers distinguishes caribou from the rest of the cervidae family! Male antlers are larger than female antlers, and they are also covered in a gray fur called velvet. Peary Caribou have denser coats than other caribou subspecies in Canada, which allows them to endure the harsh Arctic winter. In the winter, their fur is creamy-white, but by spring, it is short and dark. Their faces are short and blunt, and their hooves are quite wide, forming a snowshoe that allows them to walk easily in the winter. Peary Caribou are found on arctic tundra islands and some parts of the mainland across the Arctic Archipelago, including Banks Island, the Queen  Elizabeth Islands, the Prince of Wales and Somerset Islands, and the Boothia Peninsula. The Arctic Tundra ecosystem is described as a polar desert with short, chilly summers and lengthy, harsh winters. Peary Caribou live in small groups on the northern islands of the Northwest Territories and Nunavut. Summer habitat consists of river valley slopes or other damp places, as well as upland plains with an abundance of sedges, willows, grasses, and plants. Winter range includes exposed locations such as hilltops and high beach ridges where the snow is less and finding food is simpler. Peary Caribou require broad ranges with a diversity of habitats, as well as the opportunity to migrate about their territory. Sea ice crossings are critical passageways for Peary Caribou to access different regions of their territory. Peary Caribou are adaptable foragers, eating sedges, grasses, willow, and mosses. This subspecies travels long distances between feeding grounds each year and is usually found in small groups of no more than 12 individuals. Peary Caribou populations have historically fallen dramatically, particularly during rain-on-snow episodes or other harsh climatic events. Caribou must dig or paw down to the vegetation beneath the snow to get nourishment in the winter. This is easier in regions where the wind has removed most of the snow, and in years where there has been less snow. Rain in the fall and winter can form ground-fast ice, limiting the ability of animals to reach food. Peary Caribou populations in the Northwest Territories decreased dramatically between the 1960s and the 1990s, most likely as a result of a combination of events, including multiple years of abnormally harsh winter and spring weather. There has been a steady decline in numbers over the previous 20 years; nevertheless, there is recent evidence of an increase on the Queen Elizabeth Islands and Banks Island.

Throughout this species’ range, different Wildlife Management Boards are partnering with territorial governments and the Canadian Wildlife Service to efficiently manage this subspecies and conduct research initiatives to better understand its movements and ecology. Projects include documenting all forage hotspots and acceptable breeding grounds, improving genetic variations, and enforcing the necessity for regulating hunting quotas throughout all hunting and trapping committees.

Aside from limiting your contribution to climate change, the best method to help this caribou subspecies is to spread the news that they exist and need our help to live! Sharing information about the Peary Caribou on social media and learning more about Arctic climate change can all benefit our animal species. You can also contribute to lowering your greenhouse gas emissions!