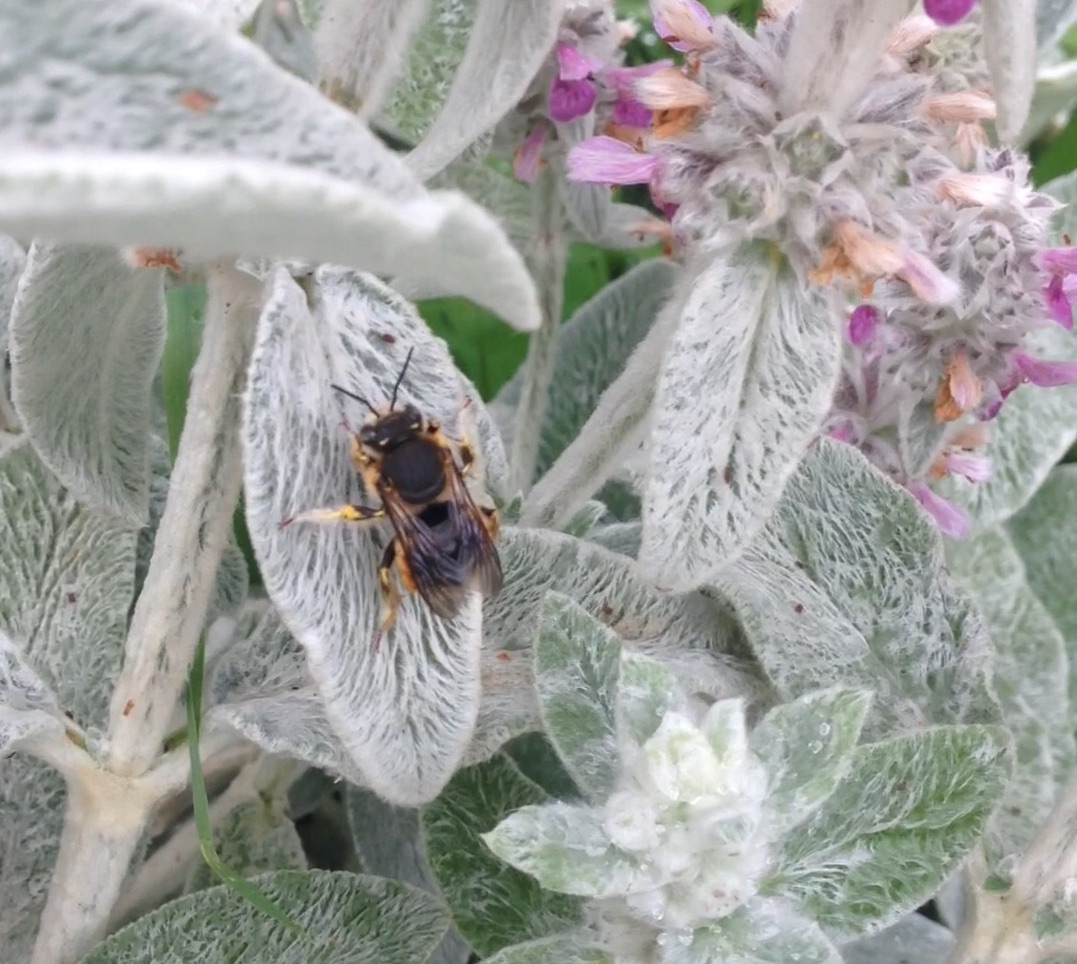 The male wool-carder bee guards its patch of flowers from all visitors other than female wool-carder bees. It patrols the patch, 'body-slamming' any invaders, and has been known to fatally wound honey bees, for example, using five spines that are located at the end of its abdomen.

The wool-carder bee is so-named because female bees will scrape or comb soft fuzzy leaves for plant hairs (a process also known as 'carding'), which they roll into a ball that they carry back to line their nests. The hairy ball is shaped into a cell where the female lays an egg atop bee bread (pollen and nectar rolled together). The female also collects glandular secretions from the plants for their nesting cells, presumably to waterproof the cells or prevent microbial growth.

This wool-carder bee is not native to North America. It is native to Europe, North Africa and western Asia, accidentally arriving here in the 1960s. The bees are mostly black with yellow markings, and females are about the size of honey bees. Male wool-carders are much bigger than females, and are notorious for their aggressive behavior. They nest in cavities, such as old beetle holes and hollow plant stems.

Unfortunately, the wool-carder bee presents a concern for native bee conservation. Wool-carders attack other native bees, such as bumble bees, and compete for both nesting and foraging resources. They also tend to preferentially pollinate exotic flowers, thus contributing to the spread of non-native plant species. Lamb's Ears is a common, introduced garden plant.

The great biologist E.O. Wilson cites invasive species as one of the biggest threats to regional biodiversity maintenance, after natural habitat loss. Kelsey Graham, a researcher at Michigan State University, encourages us to take the following actions for our native bees:

1. Plant native wildflowers that are adapted for our native pollinators.

2. Opt for a more natural yard by decreasing or eliminating perfectly manicured lawns, which are food deserts.

3. Purchase organic products when you can to decrease your pesticide footprint, another factor responsible for bee declines.