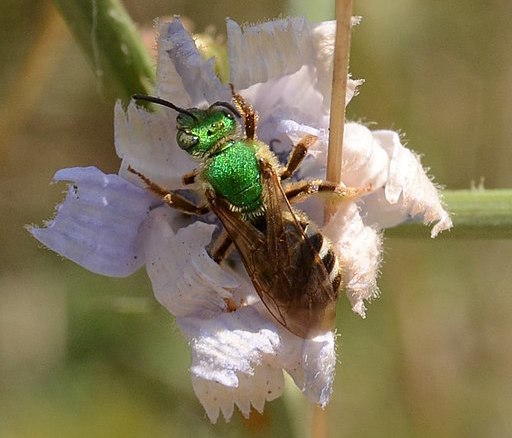 Bees around the world are classified into seven families. The Halicitidae family are commonly known as sweat bees, and according to the Xerces Society, Heather Holm and the University of Florida, they are the kind of bees you see most frequently, other than honey bees, during the summer. These bees are so-named because they often land on humans to feed on sweat for the salt.

Sweat bees are typically small and dark in colour, but also include most bright metallic-coloured bees, such as the easily identifiable female Agapostemon virescens (see photo above). This sweat bee is the only eastern Canadian species with a metallic green head and middle body region, while her hind region is entirely black with white hair bands. You likely have seen her in your garden, or you may have spied the males of the species, who look similar but have yellow hair bands instead of white. This bee is also known as the Bicoloured Agapostemon.

The halictid bees have varied nesting behaviours, ranging from solitary (each female makes her own nest) to semisocial (nests are made by a group of bees with one egg-laying queen). Some halictids are communal, which means ten or more females will share a nest entrance, but each bee is responsible for her own brood cells. When I described this behaviour to a group of grade six students, one of them likened it to an apartment building.

Most halictids nest underground, in bare loamy, sandy soil in a sunny location. Some nest in rotting wood. And some sweat bees do not nest at all. The sweat bee genus Sphecodes are called cleptoparasites, or ‘cuckoo bees’, because they steal food or prey from other bees. Sphecodes females typically kill the egg or larva in the cell before they lay an egg, but in most other cleptoparasitic species, eggs are laid on unfinished cell walls or through sealed cells and the larva of the cleptoparasite kills the other egg or larva before eating the host's stored food.

Laurence Packer, York University bee expert, suggests that the Bicoloured Agapostemon should be Toronto’s (un)official bee mascot for an interesting reason: this bee is very welcoming of strangers. It seems these bees have a communal arrangement because it increases their nest defence against potential enemies that might try to enter the nest. Because there is strength in numbers with this social system, these bees are far more likely to permit any unrelated Bicoloured Agapostemon individuals – complete strangers – into their nests to increase entrance surveillance. Most bees will defend their nests against others of their own species, but it seems that our (un)official bee is much more tolerant of newcomers.