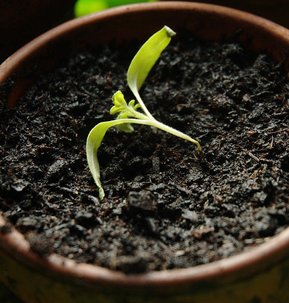 You planted your seeds in trays. You gave them water and light. They sprouted, and you watched them grow. Then suddenly one day, they toppled over as if tiny lumberjacks had cut them down, and they died.

This is a common disease known as "damping off", and there is no cure once it starts. But it's easy to prevent, and you can prevent it by taking action right now. As my old teacher used to say, the gardening year starts in the fall because you always look forward to the next season.

"Damping off" is a disease that mostly affects seedlings as they're sprouting. It's caused by several different soil pathogens, mostly fungal, but they all cause roughly the same symptoms under the same conditions. When soil is moist and somewhat cool for a long time, the disease pathogens attack tender seedlings, killing them rather suddenly. Often, the infection happens right at the base of each seedling so the first sign you see is the whole thing toppled over as if it had been cut at the base. But if you look closely you can see that the bottom of the stem is still attached, but wilted to a thread.

There is no cure, but there are lots of ways to prevent it. One good practice is to always allow the surface of the soil to dry out a bit before each watering. The damping off fungi can only grow when the soil is fully wet, so periods of dryness hold it back. The problem with this approach is that you have to be vigilant to water your seedlings at just the right time: when the soil surface is dry but the whole seedling hasn't dried out yet. Most of us water a little too much, to prevent drying, and that's why we have damping off.

An easier way to prevent any disease is to avoid the germs that cause it in the first place. Good hygiene now is better than medicine later. The pathogens that cause damping off are everywhere in garden soil and compost, so keep those out of your seedling trays. Most successful growers rely on "soilless" potting mix for indoor use, rather than soil brought indoors from the garden, because it doesn't have the disease organisms that live in real soil. If you want to use your own soil and compost though, you can sterilize the germs away by baking it in an oven or a barbeque at 200 degrees F for at least 30 minutes.

Equally importantly, don't re-use trays or pots that have been out in the garden unless you thoroughly wash and sterilize them. Whether you sow your seeds in a greenhouse, a potting shed, or just a well-lit room in your house, now is the time to wash out those planting materials you're saving for next year. A thorough scrub should get rid of all traces of garden soil, and just like dishes in a restaurant, give them a good soak in a 10% solution of bleach (half an hour is guaranteed to get rid of nasty fungus spores).

Don't forget to wash your planting tools too, or be sure to only use clean "indoor tools" with seedlings. And if you have planting mix from outdoor plants that you'd like to re-use, use it only for potting mature plants, not for seedlings.