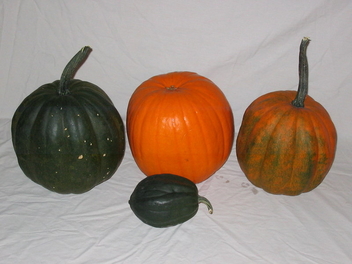 Growing and saving seeds often begins as a passion but producing high quality, pure seed is also a science. Isolation distance and minimum populations are two important factors that seed savers need to think about to ensure the seeds we grow are true to type, viable, and adaptable.

Isolation distance refers to the minimum separation required between two or more varieties of the same species to keep saved seeds from those plants true to type.

Species in the same family often have similar isolation distances, but the minimum distances vary greatly between species. For example, peas, which are self-pollinating, only require 12 meters of separation for commercial seed production, while squash, which is pollinated by insects that can travel long distances, requires 1500 meters of separation between varieties.

These enormous differences in isolation distance are a reflection of how different species are pollinated. Plants can be broken down into two main reproductive categories: self-pollinating and cross-pollinating.

Self-pollinating plants typically require shorter isolation distances because the transfer of pollen from the male anther to the female stigma occurs within the same flower, without the help of insects. Common examples of self-pollinating vegetable crops include beans, tomatoes, barley, lentil, oat, soybean and wheat.

In cross-pollinating plants, pollen is transferred from the anther of one flower to the stigma of another flower, either on the same plant or a different plant. This process is usually accomplished naturally by insects or wind, but can also be done manually by hand-pollination. If pollen from one variety fertilizes a flower in another variety, the resulting seeds will be hybrids, or in other words, will not breed true to type. Because of this, varieties of cross-pollinating plants require much larger isolation distances. Common examples of cross-pollinating vegetable crops include onion, beets, corn, cucumber, squash, radish, rye and buckwheat.

It is key to consider isolation distance when planning your seed-saving gardens and fields. If you are saving seed from plants such as squash and beets or chard, which have long isolation distances, it may even be necessary to know what your neighbours are growing to ensure that your crops won’t cross-pollinate with theirs.

While distance is the most common way of isolating plants, there are also other methods to ensure that varieties don’t cross. Three other common isolation methods include: isolation strips, caging and artificial barriers, and time isolation.

Isolation strips are areas between seed crops that are planted with tall or flowering plants that catch windblown pollen and distract insects from crossing and moving pollen from one side to the other.

Cages and artificial barriers, made of PVC and fabric row covers, physically prevent cross-pollination. Caged plants must be hand-pollinated or pollinators must be introduced into the caged or covered environment.

In addition, plants can be isolated with time instead of space; this essentially means seed savers can grow different varieties of the same species in the same year, as long as their flowering times do not overlap. This can be accomplished by planting one variety early in the season and another variety several weeks later, or by planting varieties that have different flowering times.

The larger the population, the greater its ability to adapt to a wide range of situations. For example, let’s say one grower plants 20 tomato plants, while another plants 200. Both fields are affected by bacterial speck. However, it so happens that none of the 20 plants grown by the first farmer are able tolerate the speck, and none survive. In the second field, a few plants have genes that give them resistance to the disease, and they survive. The chances that a larger population with greater genetic diversity will have at least a few plants with the ability to survive disease or other conditions is much higher. These plants will then also produce seeds that are adaptable and resilient. Planting a minimum population ensures the seeds harvested are viable, healthy and adaptable.